The inner part of the Cairngorm Loop is but a small part of a longer 300 km self-sufficient mountain bike route.

At just over 100km for the part I rode, I discovered it’s not to be under estimated; the solitude of the Cairngorm mountains, the magnitude of the hills that surrounded me, the depth of the glens through which I rode, the beauty of the rivers, the colour of the trees and texture of the heather – they all far exceeded my expectations.

Here is a collection of ten photos from the ride.

Amidst a landscape of granite and heather. On the Bynack More plateau, Cairngorms National Park

The traverse over Bynack More was challenging and technical, but by fat bike it’s amazing what you can ride over.

Well into the inner part of the Cairngorm Loop lies the Fords of Avon refuge hut. In poor conditions, I can imagine this being a welcome place to retreat to, but even in good conditions it provides a pleasant place to stop and soak up the vast surroundings.

The climb back out from the Fords of Avon, past Lochan Dubh was a true test of bike handling skills.

An intricate landscape of granite rocks and peat bogs required precise execution and careful choice of line to maintain forward momentum. Very satisfying to have completed it.

The descent of the upper part of Glen Derry was almost as unrelenting as the climb out from the Fords of Avon. Lower down, though, it became a sinuous line of fine granite singletrack that swooped and turned through the heather. 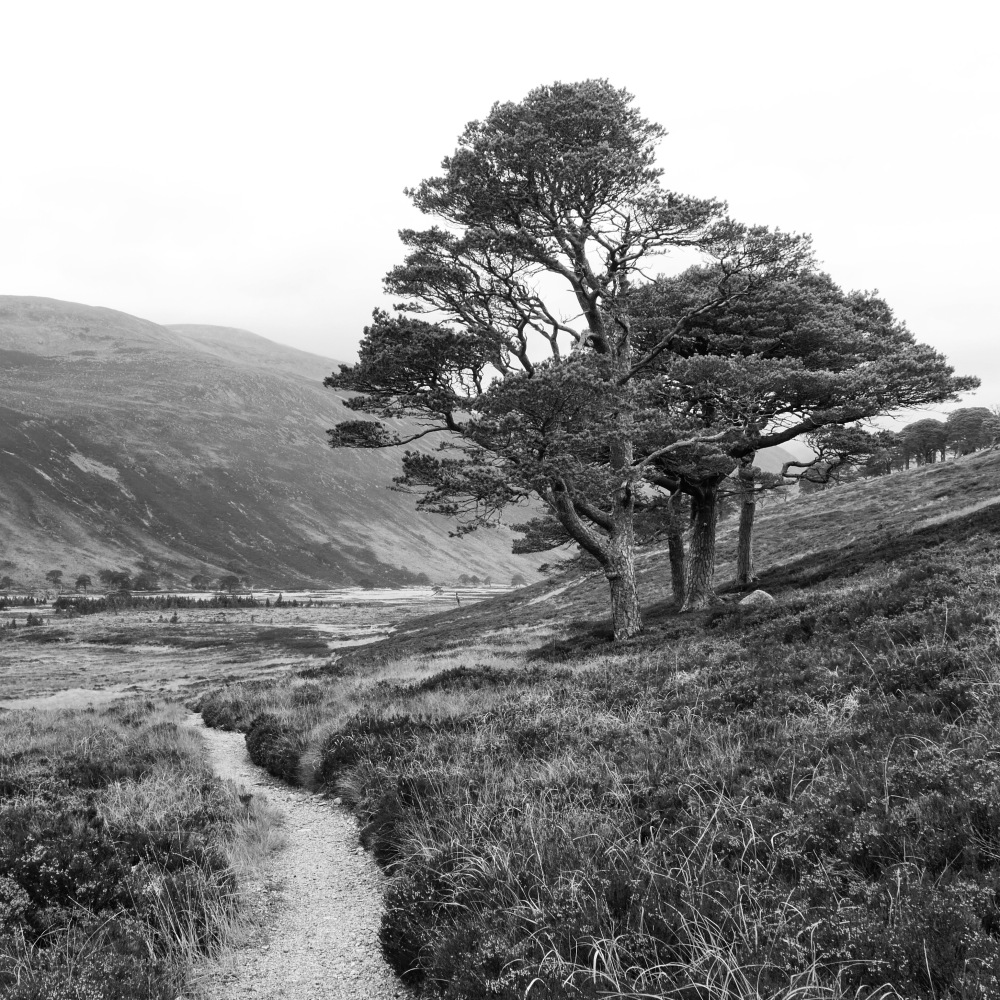 Back below the tree line the landscape was dabbed with native Scots pine; their enormous crowns cutting majestic silhouettes against the sky.

The run out from the bottom of Glen Derry was smooth gravel trails to the Linn of Dee. The broad Glen opened out and the early afternoon sun finally broke through the clouds. Finally my world was filled with the warm rich colours of autumn in the mountains. 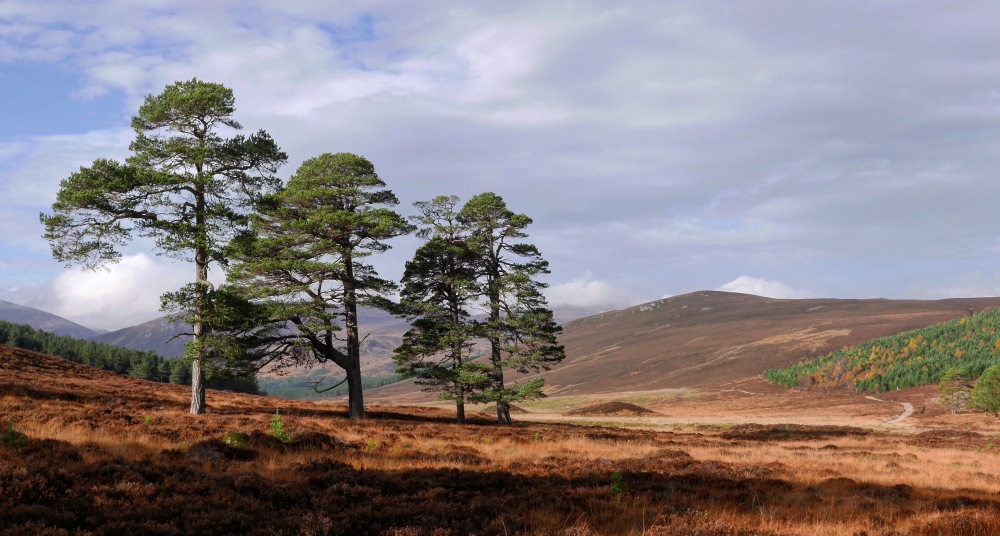 The gravel track from the Linn of Dee continued up Geldie Burn before once more becoming a tricky gradual ascent of narrow peaty singletrack, punctuated with granite rocks that commanded attention and effort to clear.

Below me the Geldie seemed to meander in a lazy fashion down the glen, without a care for the small battle that was playing out between me and the trail above.

In comparison to the gentle nature of the Geldie, the upper part of Glenfeshie was eager and fast-paced; forging a steep sided gulley at the top, it tumbles down in energetic fashion, dropping over waterfalls and racing its way down the glen.

With gravity now on my side, the only thing holding me back is my nerve, as the narrow ribbon of singletrack weaves in precipitous fashion along the edge of the gorge. 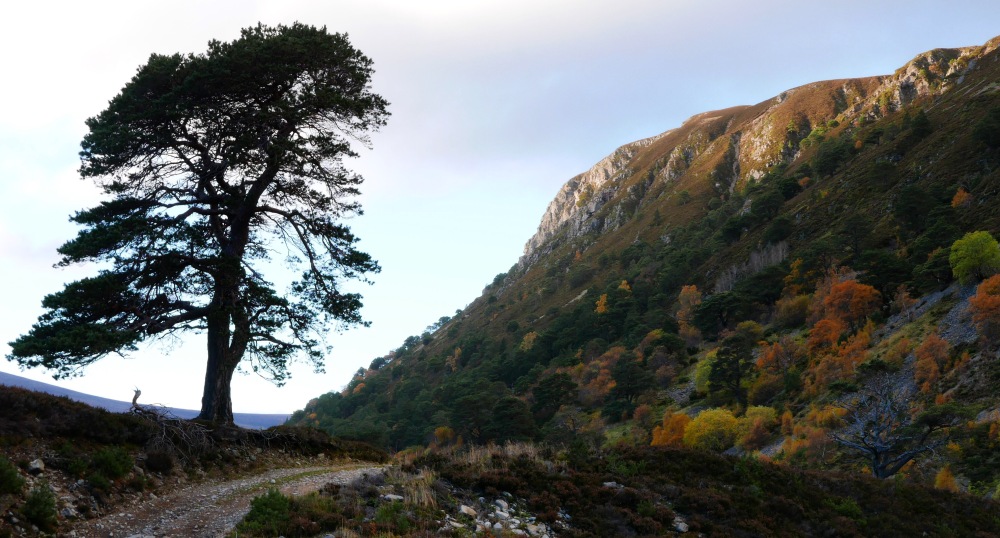 The trails remained technical, testing my commitment more than once when things got steep and narrow, but my eyes were drawn towards the upper fringes of the glen, when the late afternoon sun lit up the rocks on Creag na Gaibhre.

Then a tantalising glimpse further down the valley; the sun looked to have one more delight to offer before it settled down for the day. But could I get there in time?

The sun had gradually slipped below the range of hills to the south-west, casting the majority of Glenfeshie fully into shade. But on my descent down the glen, I could see a group of trees bathed in a golden light. 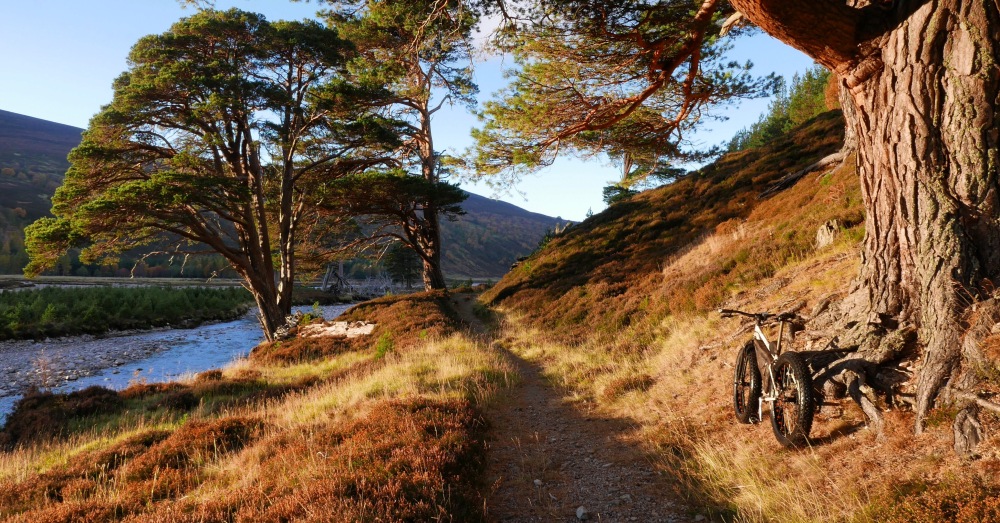 I arrived just in time to experience the last of the days sun shining down the narrow valley of Slochd Mòr. These last rays of sunshine converged exactly with my arrival at this very point on my journey.

The calmer waters of the River Feshie reflected the deepening blue of the sky, and the Scots pine and heather exuded a rich red-brown in this most amazing light.

The weather was kind, very kind, but even in these favourable conditions I had an acute awareness of how harsh this place could have be for the unprepared. 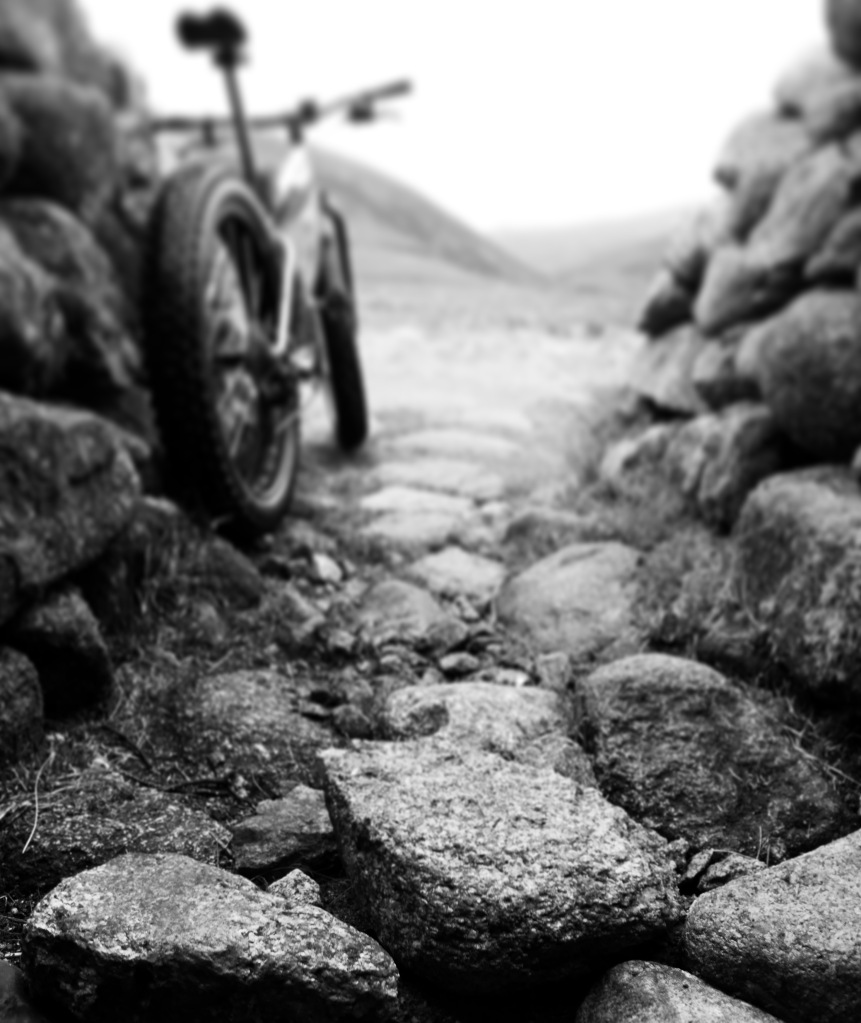 The route is simply first class. Technical and intricate in parts, but relenting and peaceful in others; finely balanced between demanding and rewarding.